Rovos Rail: A Relaxing Journey Back in Time

Home - Advice - Rovos Rail: A Relaxing Journey Back in Time

Rovos Rail is a unique privately-owned family oriented railway company started by Rohan Vos.  Although every detail related to this train is luxurious, it is never flashy, always comfortable, non-pretentious and so cleverly brings yesteryear nostalgia into today’s modern world in a fun way to experience travel.

If no rush is needed, it’s a lovely way to go back in time and skip that day flight and enjoy completely disconnecting for a few days.

From the time we arrived at the Rovos Rail station in Cape Town, the hospitality of the staff was friendly and I was pleasantly surprised to see Rohan Vos welcoming us aboard and then again there to greet you when you disembark in Pretoria for this particular route.

We  took the journey of 1,000 miles from Cape Town to Pretoria. Upon arriving we were greeted with a glass of sparkling wine in the Rovos Rail terminal lounge and after being greeted and welcomed by Rohan,  we were then brought to our suites.  Each one functions as a bedroom and living room and comes with a personal butler. 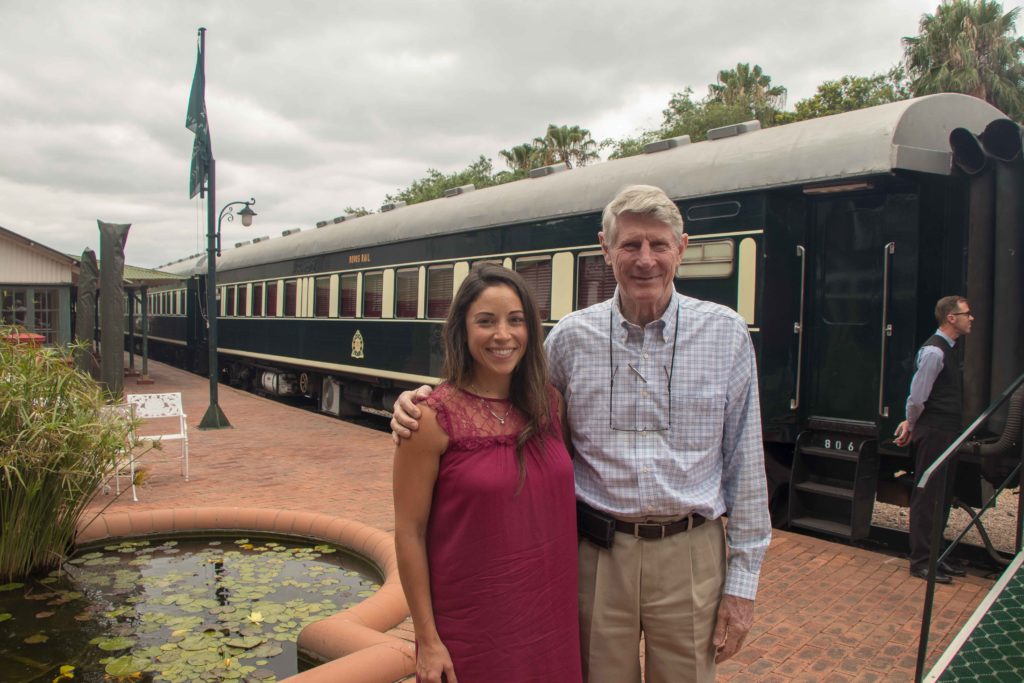 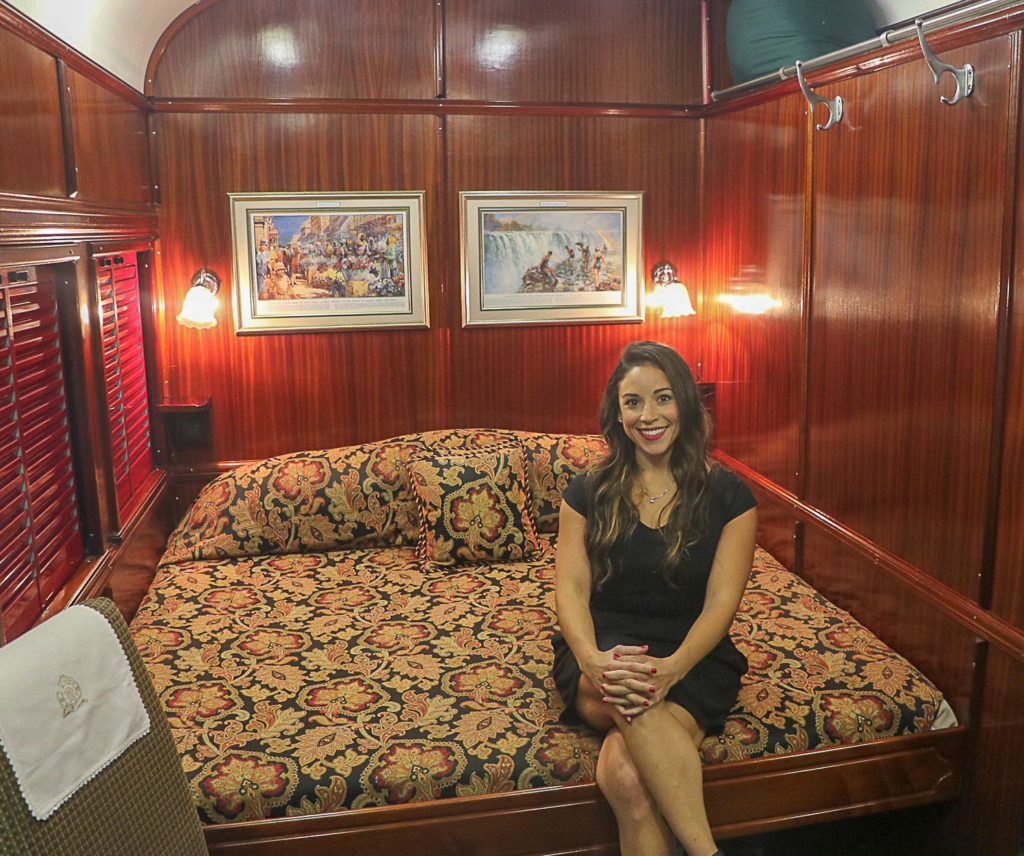 The Pride of Africa, has a very charming “Victorian chic” décor and atmosphere throughout the train and includes all-inclusive coursed meals and beverages, butler service, stopover excursions.

Singles, couples, families, and large groups were aboard, and I learned they even offer group charter opportunities. 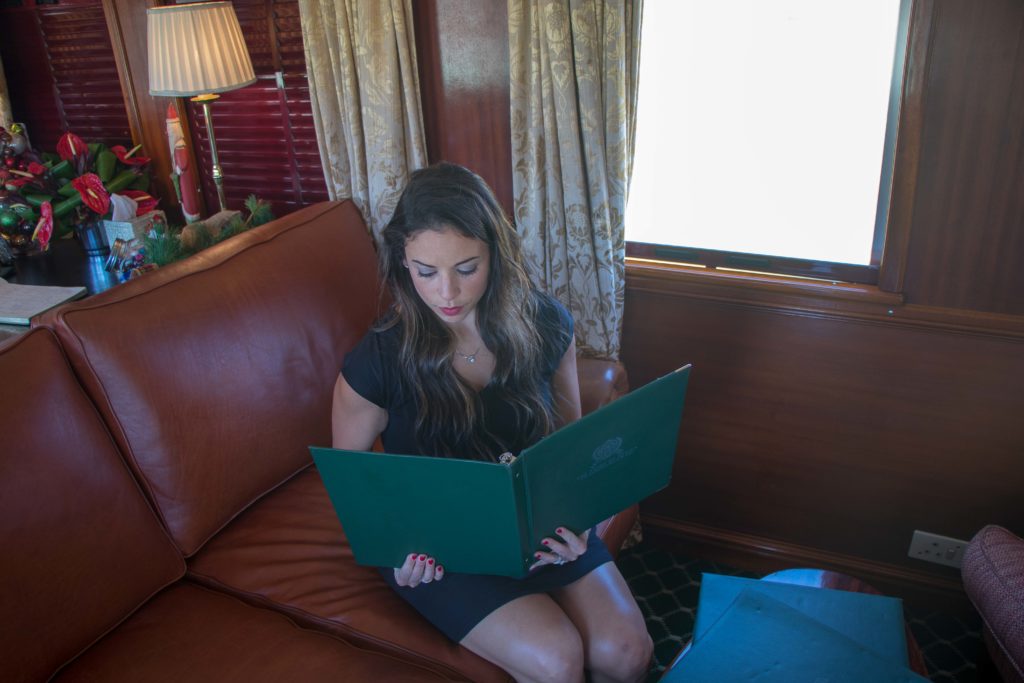 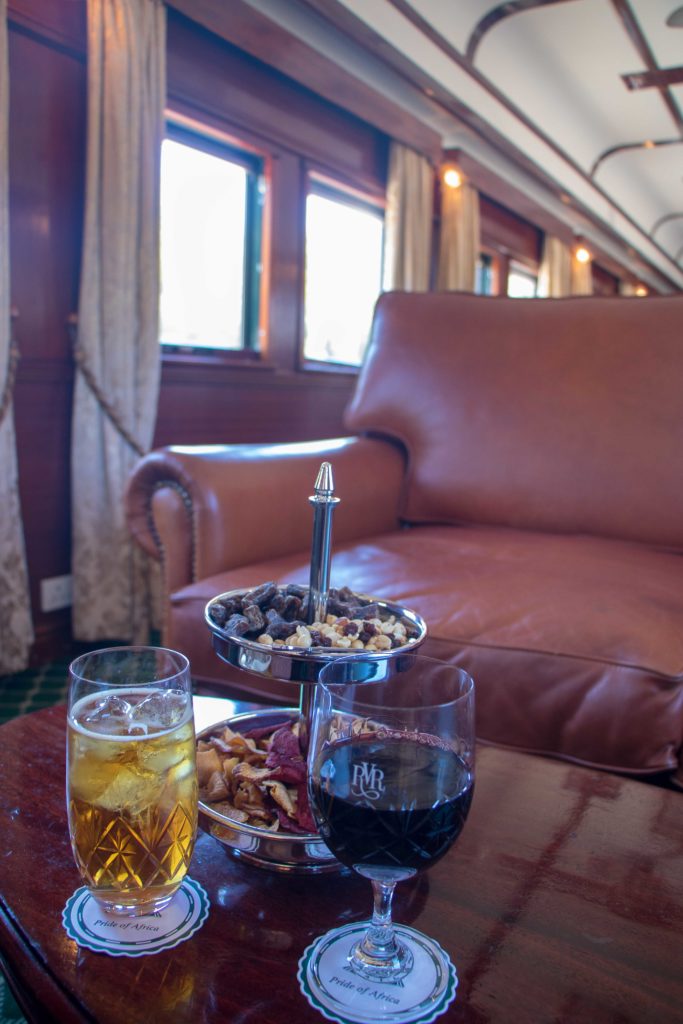 After getting on the train, I received a lot of skeptical looks from Jeremy. Especially once we started moving and we looked outside. This particular route wasn’t the main attraction for the trip, as the view isn’t always picturesque through the Karoo.  The beauty lied in the train itself and the experience they foster for each person that boards. He soon learned this was a magical type of trip that while getting used to no technology was a challenge, it was a very welcomed break from the outside world.

One of the main attractions of the trip is the food and waiting to hear the gong – (yes, there is a real dinner bell!), and at time you know something amazing is about to be served. Breakfast, four course lunches and dinners (both paired with a range of delicious South African wines) are served in one sitting in either of the two elegant dining cars. Lunch and dinner included many South African inspired dishes such as Karoo lamb, ostrich and you could always find biltong (very similar to beef jerky, but cut thinner and a leaner) to nibble on during the day.  The train graciously accommodated special requests and specific dietary needs. 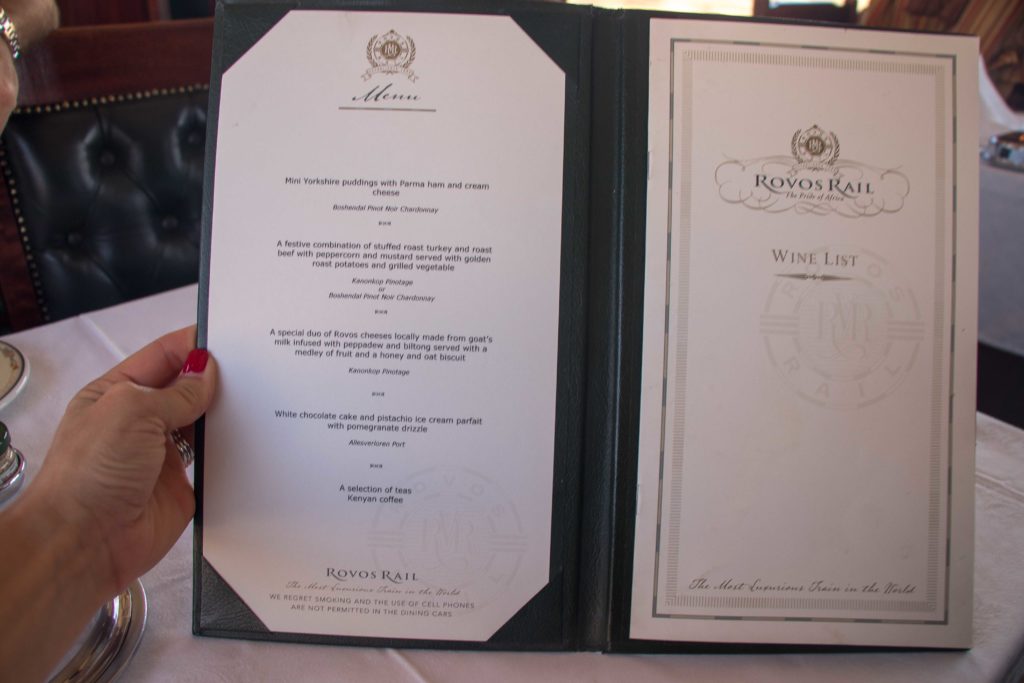 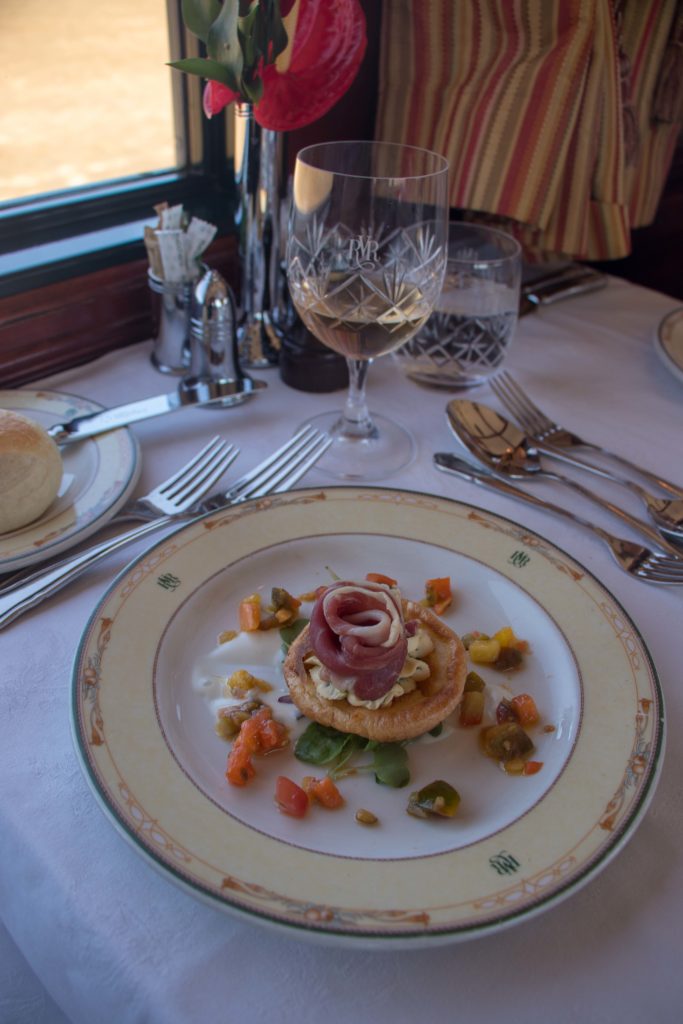 We especially loved the South African selections of wine – wines that were paired perfectly with each meal.  I almost wished there were more meals so I could have tasted and sampled even more. Every meal felt like an event and was simply incredible.

Eating and relaxing weren’t the only things to do.  Admiring the world as it passed us by in the outside observation car allowed us to enjoy the Karoo and take in the desert country and beautiful sunsets. 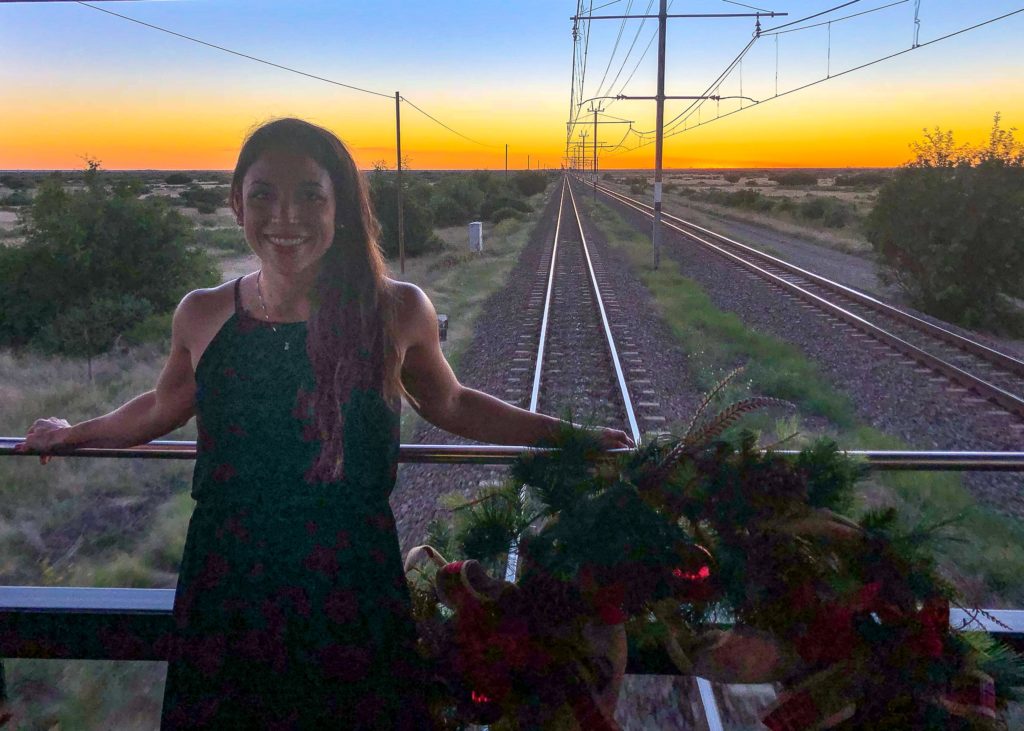 We did have two short excursion stops, one in the historic village of Matjiesfontein – it was a little underwhelming, but nice to stretch the legs.

The second stop in Kimberly, allowed us to tour The Big Hole and learn about diamonds which I thought was very intriguing, ESPECIALLY 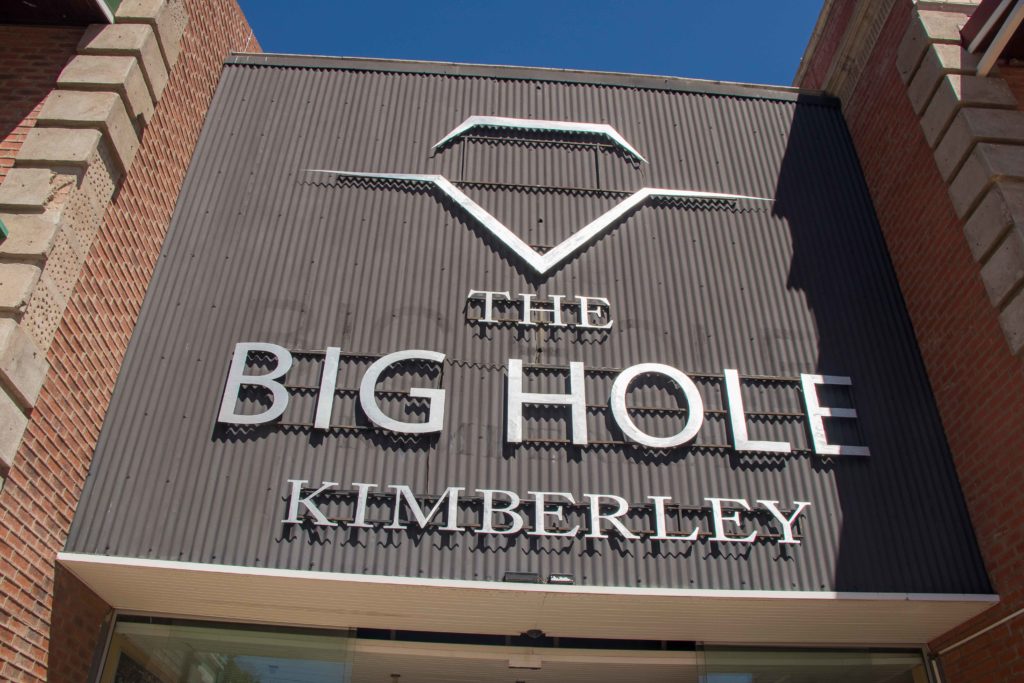 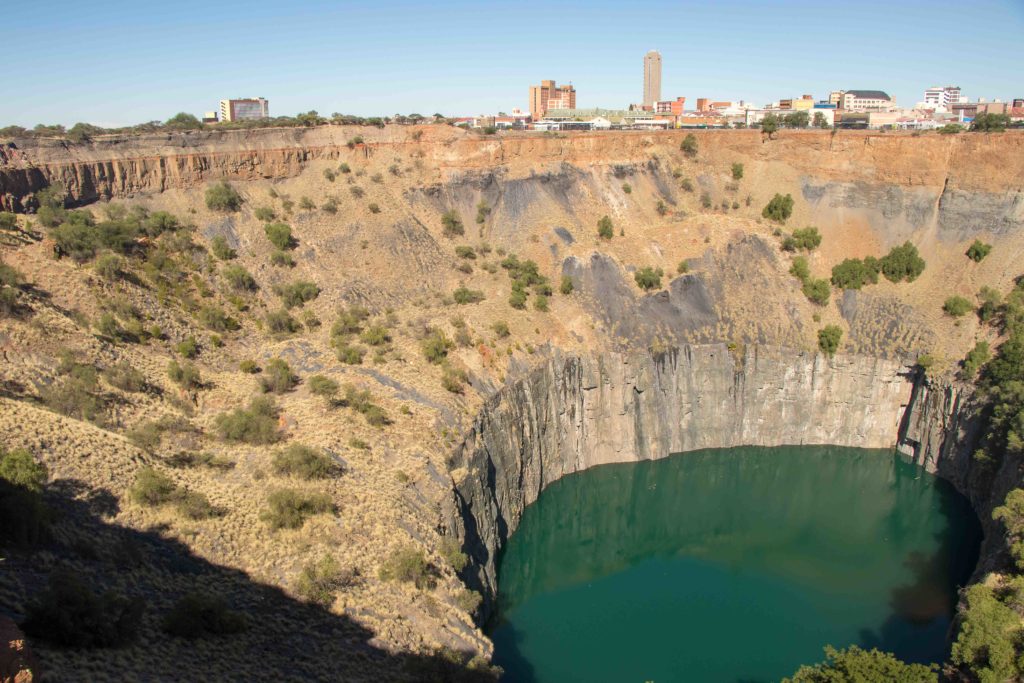 In addition to the Cape Town to Pretoria and Pretoria to Cape Town routes, there are others around South Africa, Botswana, Zimbabwe, Zambia, and Tanzania ranging from three to fifteen days.

Train travel isn’t often thought of when thinking of a trip, but this was an unexpectedly nice and luxurious addition to our South African adventure.  I will definitely seek out train experiences like this one in the future.

As one adventure ends, the next one starts.  Off to Kruger National Park!  I’ll be sharing more in my next blog post, so stay tuned and keep traveling!