So, What is it Like to Cruise on Norwegian – The Entertainment and Food

Home - Review - So, What is it Like to Cruise on Norwegian – The Entertainment and Food

This is post 2 of 4, the remaining posts will be sent out over the rest of the week. Thanks for joining us!

Prepare to Be Amazed

Anyone that knows me knows my love of food and drinks, but I honestly can say the entertainment on this cruise won me over, so let’s start there.

First things first, cruise ship entertainment is something that used to make me laugh and giggle on previous cruises. The first cruises I went on were for family celebrations and get togethers – the most important part of figuring out what cruise we were going to do truly came down to what dates could we all agree on and beyond that, we all were just go with the flow on whatever amenities came on the boat as far as entertainment, restaurants, service, etc.

The first cruise we went on was over New Year’s Eve and was one of the more memorable moments of cruising that we still all share today, but part of that memory always includes thinking it was hilarious that the same cruise ship staff that had just served us lunch or drinks by the pool were now donning YMCA costumes and were dressed up in outfits that you could tell they were clearly embarrassed to be singing and dancing in, so you can imagine for every cruise I’ve been on, I enjoyed the entertainment, but it never has been a reason to book a trip, nor is it what I look forward to each. Norwegian changed everything when it comes to cruise ship entertainment for me.

One of the first things I noticed with Norwegian is they offered a different show every night, and not just something rehearsed earlier in the day where servers are nervously looking at each other to see if they know the choreographed moves to a song. The set design on stage in the Stardust Theater, the number of costume changes, choreography, singing ability – everything was completely current and on trend for what you’d actual pay for off of a ship. Broadway and Vegas level quality shows that would normally cost north of $100 per ticket was the norm every night of the cruise – but without any additional cost. Shows were always at 7:30 and 9:30pm, which easily could be fit in around freestyle dining. We chose to eat at 8pm each night, giving us plenty of time to get to the theater for the 9:30 show.

Blazing Boots, Elements and the Christmas performance were absolutely top notch – I haven’t seen a ship where you can get Cirque du Soleil level acrobatics (including aerial and over the crowd stunts!), singers at the level of pop stars, dancers that look like they could dance backup at a concert and not to mention comedians and magicians to boot.

Overall, I left each night’s performance mesmerized and felt engaged the entire time.

In addition to the performances, Norwegian Cruise Line turned 50 while on board, so a special 50th birthday party was thrown in the Spinnaker lounge, and we danced the night away. I thought it was such a fun touch that they encouraged everyone to take a selfie and tag the ship – plus, they gave everyone free internet for the birthday party. Talk about a big hit with the guests onboard!

(Do note, there is a curfew on board after 11pm when the music changes and the party really starts)

After seeing what Norwegian has to offer, it will be easy to match a client that has a love for performing arts to a cruise line that has a ton to offer, making their vacation shine.

Now onto the food! This one is always tricky. How do you review food that is made for thousands of guests on a boat, 24 hours a day? When you really think about that, it isn’t an easy task, but that doesn’t mean you still can’t get great quality food on board.

The Norwegian Jade has two main dining rooms, one on Forward (Alizar) and Aft (Grand Pacific) that offer the same menu for dinner each evening. They are smaller than typical cruise ship dinner dining, which meant very fast service, every night. The only differences between the two are Grand Pacific had a dress code, is more traditional and was slightly larger than Alizar. The biggest difference I noticed for main dining on this ship versus other cruises is there are no dedicated wine/beverage waiters; this was done by the general wait staff. Sometimes this actually slowed down service because while your server was taking orders at another table, you had to wait to order a drink. Not a deal breaker, but something we noticed as the biggest difference. 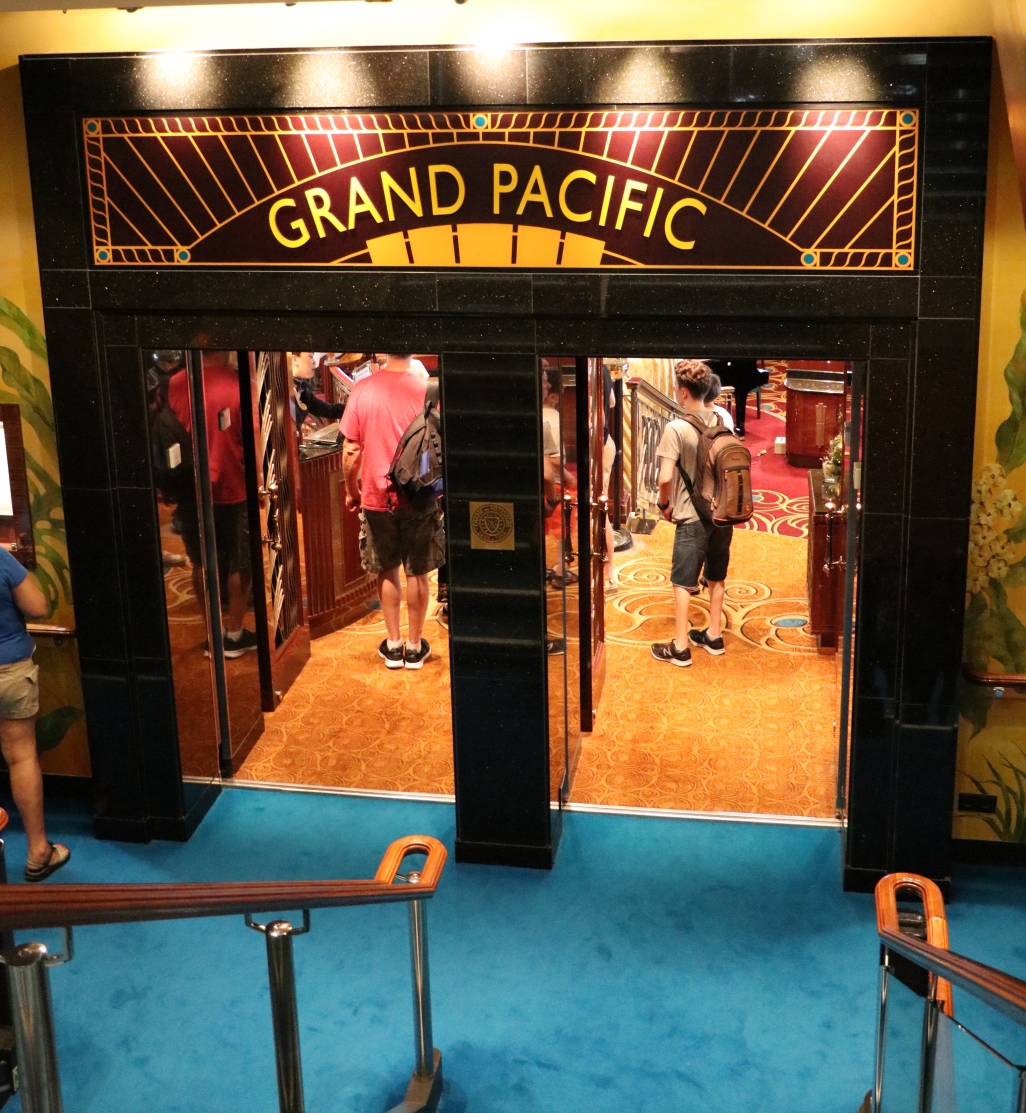 For buffet options, the Garden Café was open for every meal, there was also The Grill poolside and The Great Outdoors, which was beautiful to go to anytime the boat was leaving port and watch it sail away on Deck 12.

Blue Lagoon and Jade Garden are also two casual sit down options if you’re looking to steer away from the buffets. One interesting fact, Blue Lagoon is open 24 hours…wink wink for all you night owls and midnight snackers 🙂

Norwegian is also known for having one of the largest selection of specialty restaurants, and the Jade has an impressive six options – Cagney’s Steakhouse, Moderno Brazillian Churrascaria, Sushi Bar, Teppenyaki, Le Bistro and La Cucina, which are either a la carte pricing or a flat fee.

We tried every restaurant on the boat with the exception of La Cucina and Jade Garden. The specialty restaurants were amazing; the sashimi was fresh and the sushi rolls amazing (we kept saying we were going to back, but with all the options, we ran out of meals!).

Moderno, the Churrascaria, was by far our favorite – better than any Brazilian steakhouse we’ve had off of a boat.

If you’ve never been to a Brazilian steakhouse, it is quite the event. How it works is you’re given a green card at your table, which sends a signal that you’re ready for the chefs/servers to stop by as they’re walking through the restaurant and offer you the cut of meat on their skewer. You will see chefs carrying filet mignon, sirloin, lamb leg, lamb chops, sausage, chicken legs and more. When you want a break from the meat madness, you turn your card to red. 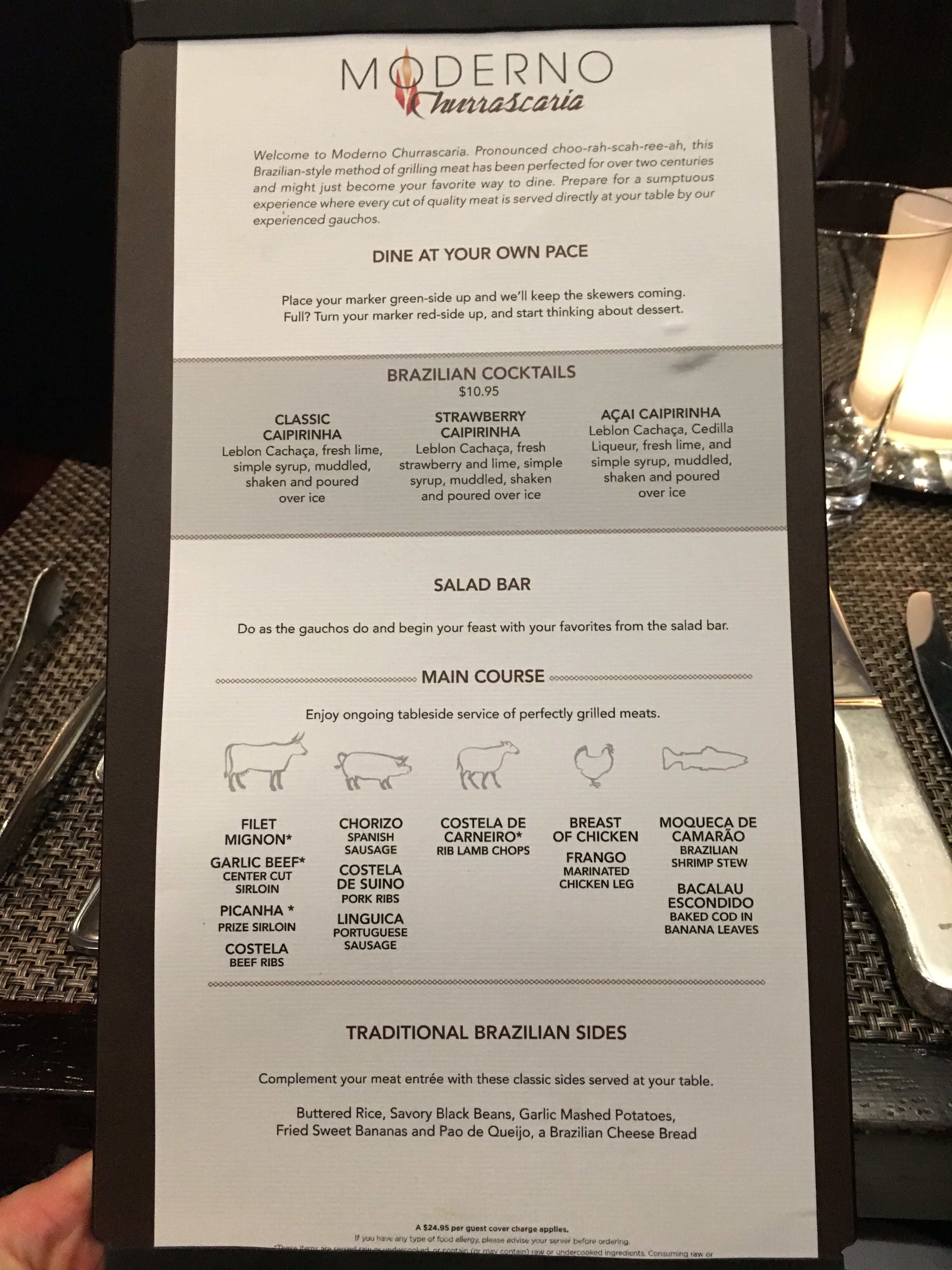 The quality of the meats, sides and salad bar were amazing and we never waited for something new to try and if you ever get to try Moderno, you’ve got to get the pineapple – it’s a treat from heaven.

Cagney’s Steakhouse had a very expansive menu selection and felt like a true steakhouse. Presentation was clean and was so true to form of a land based steakhouse, you’d never know you were floating in the middle of the ocean.  You’ll want to save room for the salads and appetizers too!  This was my first time trying a Tomahawk steak and we also ordered the bison filet. Both were solid!

Le Bistro, the French Restaurant had a nice soft and seclude ambiance and they served amazing lamb chops. I wish I would have gone back again for the chocolate fondue – so rich and creamy!

Overall, the food that you paid extra for in the specialty restaurants was definitely better than the food in the main dining and buffet areas on the boat. And while we only tried the buffet two mornings for breakfast, we felt the quality of Norwegian’s buffet was better than other cruise lines we’ve tried. Where the boat fell a little flat was the main dining areas, the food was just not at the same level we’ve had on other cruise ships. Luckily, as part of the room package I was able to put together, all of our specialty restaurants were included in the price of our cruise – something as a travel professional I often have access to that you can’t find online!

The Drinks and Lounges 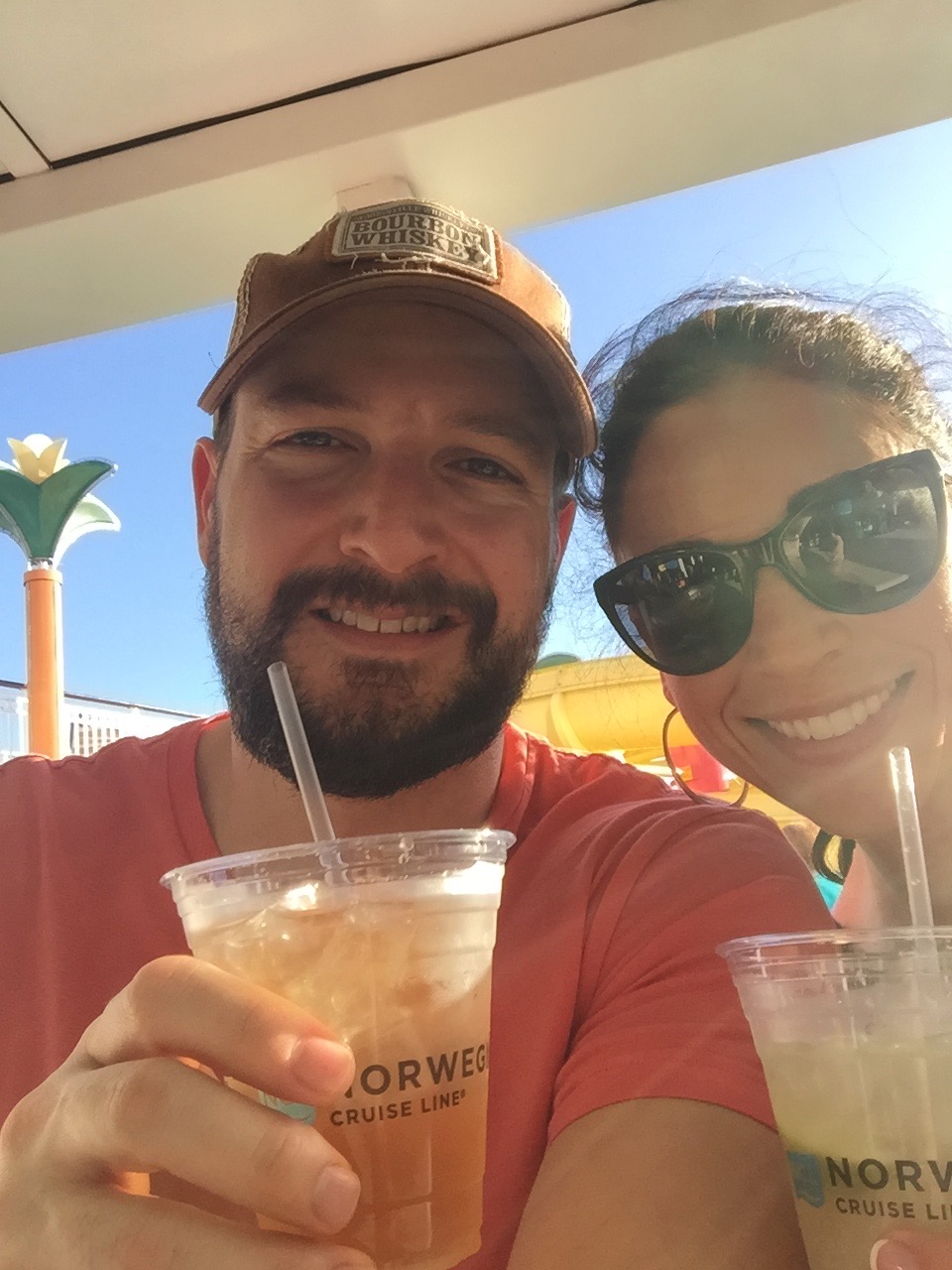 Drinks can be ordered anywhere on the boat, but if not drinking poolside, we spent the majority of our time at the three bars located mid-ship:

There are no walls separating the three bars, but all three have different specialty cocktails to choose from, each featuring something new and different, and live music every night! 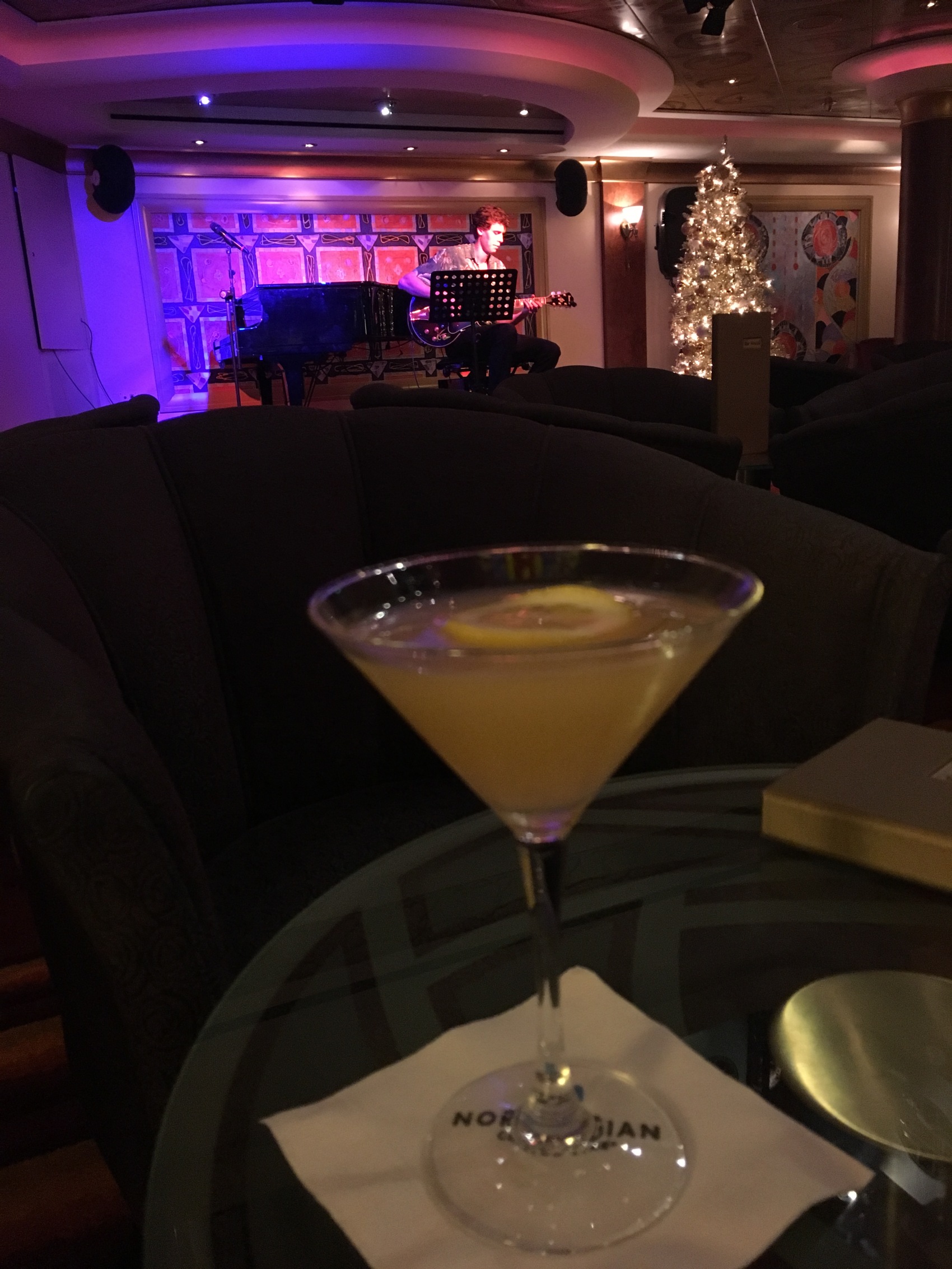 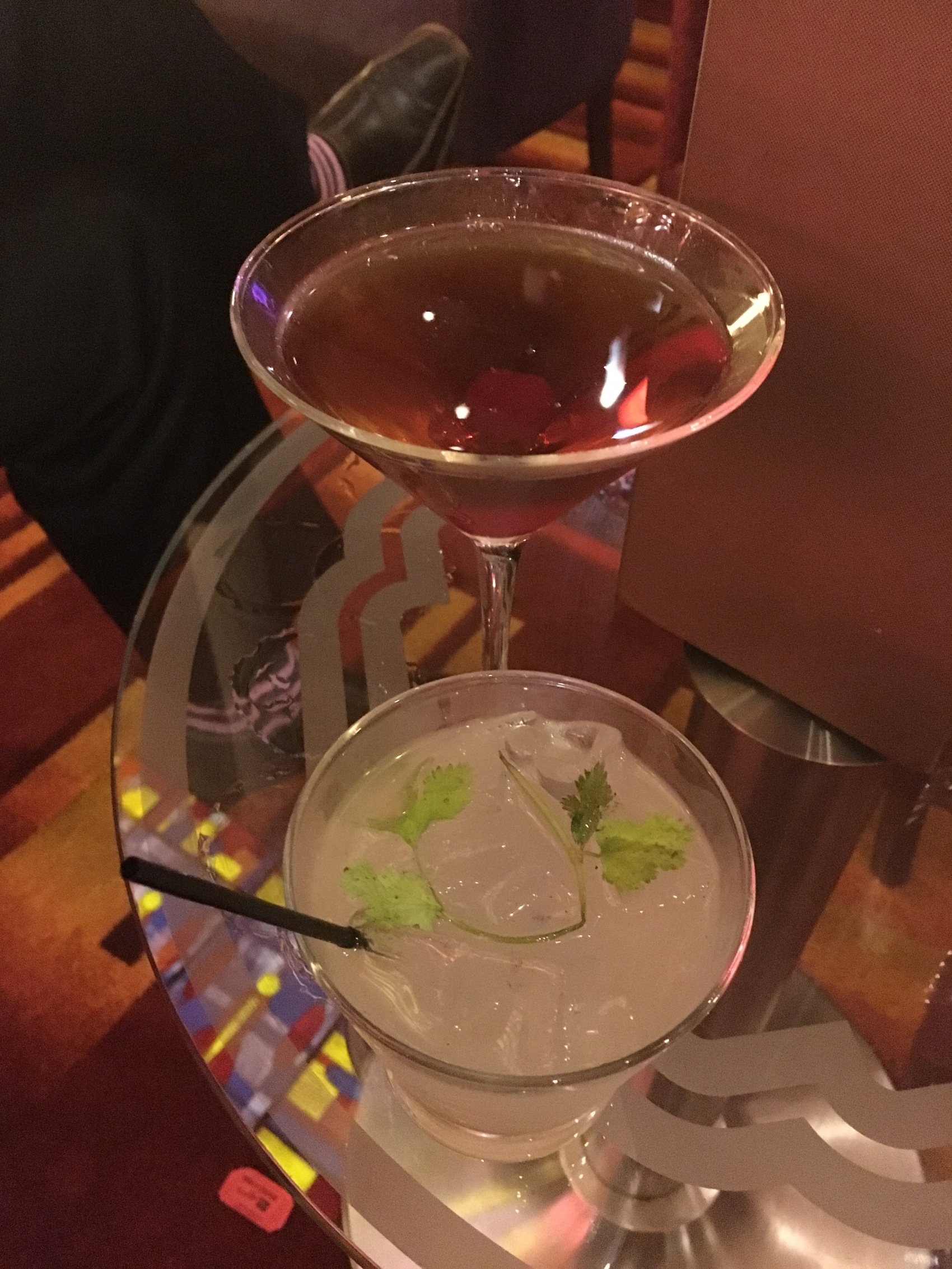 We had the all you can drink beverage package (included in the cruise package I mentioned above!) and a neat little surprise that we loved was the receipts. As in, there were none. Seriously, none. Unlike other cruises, where (even with an unlimited beverage package) you still had to sign a receipt that showed $0.00, annoying. It’s such a waste of paper and the guests’ time. What we loved on Norwegian was that we didn’t have to sign for one drink ordered (gratuity is included, as well).

Two things we didn’t particularly care for with Norwegian’s beverage package: 1. The wine. The wines by the glass were terrible. Ok, ok, we are self-proclaimed wine snobs, but if we wanted a decent glass of wine based on what we have at home, it meant ordering and paying extra for a bottle. We’ve been on other cruises with a varying wine selection by bar and dining room, whereas this boat it was the same wines by the glass no matter where you went – many ½ empty glasses left at dinners where we just couldn’t drink it – something I’ll be keeping in mind when booking wine loving clients in the future – not all cruise line drink menus are made equal!   The second thing we didn’t like was that water, specialty coffees and teas weren’t included in the Unlimited Beverage Package. Other cruises we’ve been on we have been able to order bottles of water at any bar for free; we quickly learned a water bottle package would need to be purchased separately.

Travel tip: bring your own water bottle on board and fill it up!

Best part of the beverage package if you do choose to drink is you avoid the surprise of the end of the cruise bill.  Knowing all of our drinks were covered up front meant we could truly enjoy the cruise without worrying what our bar tab was climbing to, something that was pure sticker shock on our first cruise and something we haven’t had to worry about since.

Another thing we didn’t have to worry about – crowds, lines and being around other people if we wanted quiet! How did we do that on a cruise ship of over 2,000 guests? Find out in tomorrow’s post about Norwegian’s private getaway The Haven.